The flag of Iowa consists of three vertical stripes of blue, white, and red, reflecting Iowa’s history as part of the French Louisiana Territory. (Because of the wider middle stripe and symmetric design, the design is sometimes classified as a “Canadian pale”.) The image of a bald eagle with a long ribbon reading “Our liberties we prize and our rights we will maintain”, taken from the state seal, is centered in the middle white stripe. The word “Iowa” is placed directly below it in red, serifed majuscules. The flag was adopted in 1921; it was first approved in May 1917, by the Iowa State Council for Defense. It was designed in 1917, by Mrs. Dixie Debhardt, of the Daughters of the American Revolution of Iowa. 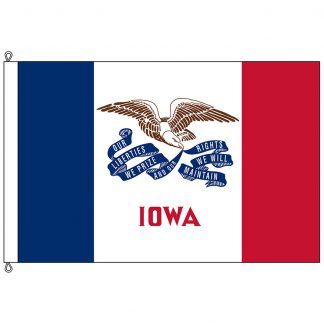