The flag of the state of Illinois was designed in 1912 by Lucy Derwent in response to a contest held by the Daughters of the American Revolution. The flag became the official state banner on July 6, 1915 following its passage in the Illinois State House and Senate. Governor Edward F. Dunne did not sign the bill, but neither did he veto it. In the 1960’s, Chief Petty Officer Bruce McDaniel petitioned to have the name of the state added to the flag. He noted that many of the people he served with during the Vietnam War did not recognize the banner. Governor Richard B. Ogilvie signed the addition to the flag into law on September 17, 1969 and the new flag was designed by Mrs. Sanford Hutchinson and became the official flag on July 1, 1970. The current flag depicts the Great Seal of Illinois, which was originally designed in 1819 and emulated the Great Seal of the United States. In the eagle’s beak there is a banner with the state motto, “State Sovereignty, National Union”. The dates on the seal, 1818 and 1868 represent the year Illinois became a state and the year in which the Great Seal was redesigned by Sharon Tyndale, who had it redesigned as he thought that the “State Sovereignty” bit was emblematic of the Civil War. 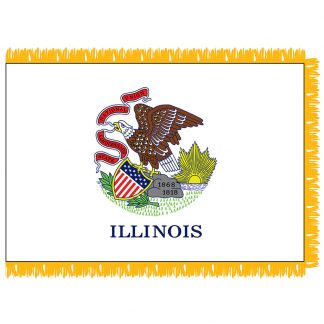