The flag of Dominica was officially adopted on November 3, 1978, with some small changes having been made in 1981, 1988, and 1990. The flag features the national bird emblem, the sisserou parrot. The cross represents the Trinity and Christianity, with yellow the original inhabitants, black the fertile soil, and white the pure water. The green field represents the lush vegetation of the island. The centered stars symbolize the ten island parishes, while the red disc stands for justice. 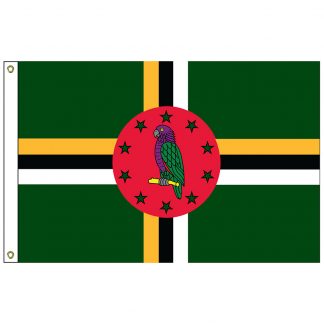 You're viewing: IFM-DOMINICA Dominica 12″ x 18″ Outdoor Nylon With Heading And Grommets $29.70
Add to cart
Scroll Up