This flag is unique in both its red, white and blue alternating stripes and the seven pointed stars in the field. It is named for the British ship H.M.S. “Serapis” that John Paul Jones captured in one of the most famous sea battles of the Revolution. In winning the battle, Jones’s own ship the Bon-Homme Richard was so damaged that he was forced to abandon his sinking ship and transfer to the Serapis. It was this flag that flew above the Serapis when it sailed into the Dutch Port of Texel. 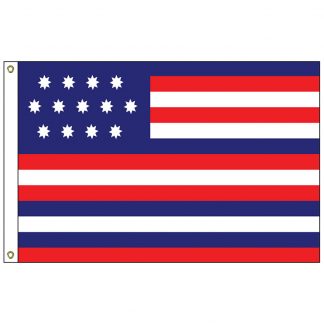