Nylon outdoor R.I. Regiment flag. Expertly crafted using heavyweight bunting material of 100% acid-dyed nylon. All seams are double-stitched and fly ends have 4 rows of stitching for added durability. Finished with heavy-duty, no shrink white header material for the strongest headers in the industry. These nylon flags offer lustrous beauty, superior wear plus excellent fly-ability even in the slightest breeze.

In Rhode Island the anchor has been used as a state symbol ever since 1647 which is evident in the current State flag. The anchor represents Rhode Island’s seafaring activities and the thirteen stars, the original thirteen colonies. The native Rhode Islanders were among the first to join the Minutemen outside Boston. The Rhode Island Regiments served at the Battles of Brandywine, Trenton and Yorktown. This flag is preserved today in the State House at Providence, Rhode Island. 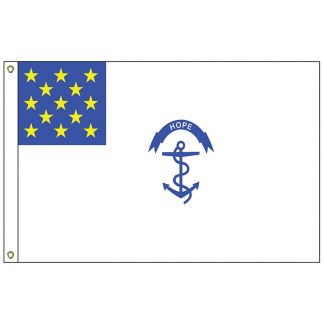