Nylon outdoor Guilford Courthouse flag. Expertly crafted using heavyweight bunting material of 100% acid-dyed nylon. All seams are double-stitched and fly ends have 4 rows of stitching for added durability. Finished with heavy-duty, no shrink white header material for the strongest headers in the industry. These nylon flags offer lustrous beauty, superior wear plus excellent fly-ability even in the slightest breeze.

This flag is an example of the lack of uniformity in American flags during the Revolutionary period as each group chose what flag to be used as it’s standard. This flag has the unique elements of an elongated canton and blue stripes. It was raised over the Guilford Courthouse, North Carolina on March 15, 1781 under the leadership of General Greene whose militiamen halted the British advance through the Carolinas and turned them back to the seaport towns. This was one of the bloodiest battles of the long war with the British losing over a quarter of their troops. 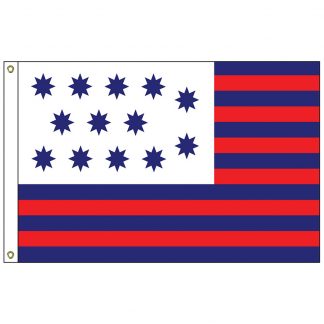