Nylon outdoor Green Mountain Boys flag. Expertly crafted using heavyweight bunting material of 100% acid-dyed nylon. All seams are double-stitched and fly ends have 4 rows of stitching for added durability. Finished with heavy-duty, no shrink white header material for the strongest headers in the industry. These nylon flags offer lustrous beauty, superior wear plus excellent fly-ability even in the slightest breeze.

On August 16, 1777 the “Green Mountain Boys” fought under General Stark at the Battle of Bennington. It’s green field represented their name and the thirteen white stars a tribute to the thirteen colonies. A notable victory of the Green Mountain Boys under Ethan Allen, occurred on the morning of May 10, 1775, when they silently invaded the British held Fort Ticonderoga and demanded its surrender “In the name of the great Jehovah and the Continental Congress”. The captured cannon and mortars were transported across the snow covered mountains of New England and their installation on the heights over Boston Harbor enabled Washington to force the British to leave that important seaport. 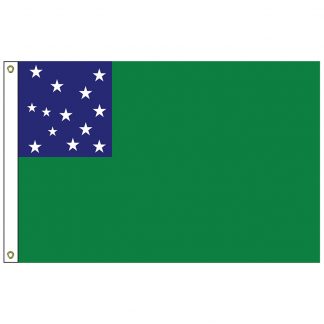