Nylon outdoor Fort Moultrie flag. Expertly crafted using heavyweight bunting material of 100% acid-dyed nylon. All seams are double-stitched and fly ends have 4 rows of stitching for added durability. Finished with heavy-duty, no shrink white header material for the strongest headers in the industry. These nylon flags offer lustrous beauty, superior wear plus excellent fly-ability even in the slightest breeze.

This flag was carried by Colonel William Moultrie’s South Carolina Militia on Sullivan Island in Charleston Harbor on June 28, 1776. The British were defeated that day which saved the south from British occupation for another two years. The South Carolina state flag still contains the crescent moon from this Revolutionary flag. 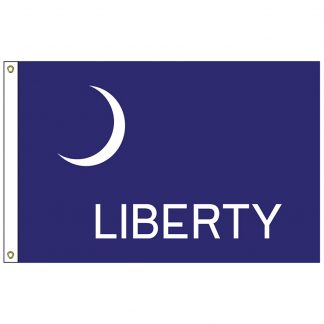