Nylon outdoor Culpepper flag. Expertly crafted using heavyweight bunting material of 100% acid-dyed nylon. All seams are double-stitched and fly ends have 4 rows of stitching for added durability. Finished with heavy-duty, no shrink white header material for the strongest headers in the industry. These nylon flags offer lustrous beauty, superior wear plus excellent fly-ability even in the slightest breeze.

This flag represented a group of about one hundred minutemen from Culpepper, Virginia. The group formed part of Colonel Patrick Henry’s First Virginia Regiment of 1775. In October-November 1775 three hundred such minutemen, led by Colonel Stevens, assembled at Culpepper Court House and marched for Williamsburg. Their unusual dress alarmed the people as they marched through the country. The word “LIBERTY OR DEATH” were in large white letters on the breast of their hunting shirts. They had bucks’ tails in their hats and in their belts, tomahawks and scalping knives. 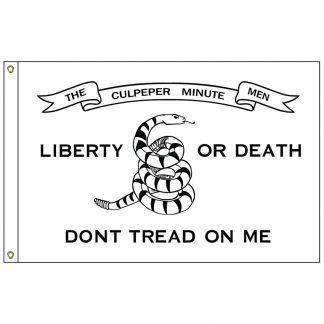