Nylon outdoor Commodore Perry flag. Expertly crafted using heavyweight bunting material of 100% acid-dyed nylon. All seams are double-stitched and fly ends have 4 rows of stitching for added durability. Finished with heavy-duty, no shrink white header material for the strongest headers in the industry. These nylon flags offer lustrous beauty, superior wear plus excellent fly-ability even in the slightest breeze.

During the War of 1812, this flag flew aboard Oliver Hazard Perry’s flagship “Lawrence” while commanding an American squadron in the Battle of Lake Erie on September 10, 1813. Perry had named his ship after Captain James Lawrence, the hero of an earlier sea battle off New England whose dying words were “Don’t Give Up The Ship”. 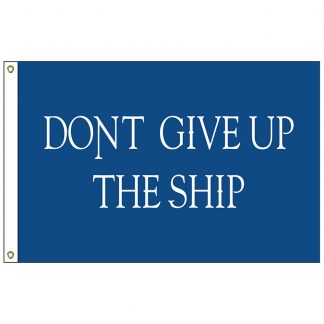