Nylon outdoor Calvary Guidon Flag. Expertly crafted using heavyweight bunting material of 100% acid-dyed nylon. All seams are double-stitched and fly ends have 4 rows of stitching for added durability. Finished with heavy-duty, no shrink white header material for the strongest headers in the industry. These nylon flags offer lustrous beauty, superior wear plus excellent fly-ability even in the slightest breeze.

One of the three flags of Colonel George A.Custer and the Seventh Cavalry at the Battle of Little Big Horn. This was the standard Cavalry guidon of that era, 1876. Custer also had a personal headquarters flag, it was swallowtailed of equal horizontal stripes of red over blue with two crossed white sabers in the center. This flag was made by the Colonel’s wife. Both the Guidon and the personal flag were carried into the battle. The third flag was the regimental standard. This flag resembled the modern state flag of North Dakota, with the exception of the inscription in gold on the red ribbon which read, 7th U.S. Cavalry. This flag was not carried into the battle. 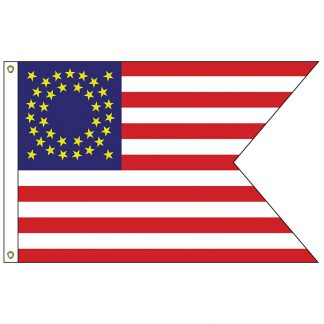