Nylon outdoor Bunker Hill Blue flag. Expertly crafted using heavyweight bunting material of 100% acid-dyed nylon. All seams are double-stitched and fly ends have 4 rows of stitching for added durability. Finished with heavy-duty, no shrink white header material for the strongest headers in the industry. These nylon flags offer lustrous beauty, superior wear plus excellent fly-ability even in the slightest breeze.

On the night of June 16-17, 1775, the Americans fortified Breed’s and Bunker Hills overlooking Boston Harbor. Although they had not officially declared their independence, a fight was underway. When the British advanced up the slope the next day they saw an early New England flag, possibly a red or blue banner. Many early Colonial flags had been made by altering the English flag and most still contained a reference to the mother country. This was an example that the Colonists still saw themselves as British subjects but were declaring their right to be free from violation of their liberties. 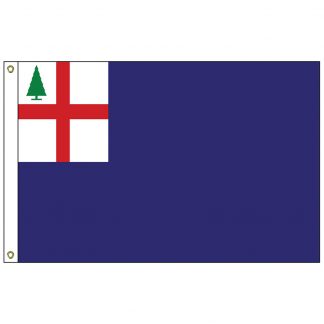