This beautiful Historical American flag is constructed out of nylon for lasting durability and outdoor use. Makes an excellent decoration for holidays, political campaigns, and historical landmarks.

This flag was designed by Captain Samuel Chester Reid, U.S.N. at the request of Congressman Peter H. Wendover of New York. Wendover asked Reid to design a flag that would allow for the increase of the number of states without destroying the distinctive character of the flag. He was most concerned that the committee appointed to inquire into the expediency of altering the flag was considering increasing both the stars and the stripes. Reid recommended that the stripes be reduced to thirteen for the original states, and that the number of stars representing the whole number of states be formed into one great star on the canton. When this matter came before the house on March 24, 1818 considering this design, the only difference being that the stars were not in the shape of a star, however, the proposal to keep the stripes to thirteen for the original colonies remained. 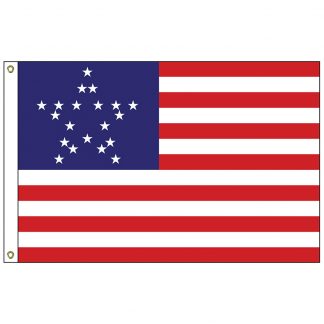