The current flag of Georgia was adopted on May 8, 2003. The flag has three red and white stripes, with the state coat of arms (taken from the state seal) on a blue field in the upper left corner. In the coat of arms, the arch symbolizes the state’s Constitution and the pillars represent the three branches of government: legislative, executive, and judicial. The words of the state motto, “Wisdom, Justice, Moderation,” are wrapped around the pillars, guarded by a male figure dressed in Colonial attire like a soldier of the American Revolution, with a drawn sword representing the military’s defense of the Constitution. An additional motto, In God We Trust, appears under these elements, though it is not part of the state seal nor coat of arms. The thirteen stars surrounding these elements commemorate Georgia’s position as one of the original thirteen colonies. 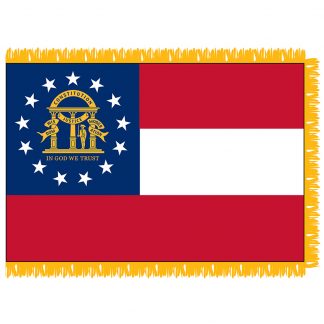