From 1868 to 1900, the flag of Florida was simply the seal of Florida on a white background. In the late 1890s, Governor Francis P. Fleming suggested that a red cross be added so that it would not appear to be a white flag of truce when hanging still on a flagpole. Some have claimed that the cross is intended to recall the blue saltire of the Confederate Battle Flag. However, this view is not universal and there is no significant opposition to the current design within the state (as there has been in Georgia and Mississippi over their Confederate-style flags). Historically, the first Spanish flag over Florida was a red saltire ragulée (knotted) with a white background (the Burgundian Saltire). The flag of Alabama is a plain red saltire, as is Saint Patrick’s Flag, which is incorporated into the Union Flag of the United Kingdom. 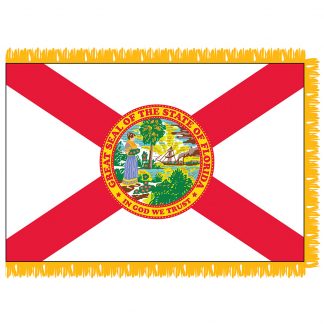