The flag of Delaware consists of a buff-colored diamond on a field of colonial blue, with the coat of arms of the state of Delaware inside the diamond. Below the diamond, the date December 7, 1787, declares the day on which Delaware became the first state to ratify the United States Constitution. The colors of the flag reflect the colors of the uniform of General George Washington. The coat of arms in the center of the flag was adopted on January 17, 1777. It depicts a shield of horizontal red, blue and white stripes. On the stripes is a sheaf of wheat, a cob of corn, and an ox standing on grass, all representing Delaware’s agriculture. Above the shield is a sailing ship. Supporting the shield are a farmer on the left and a soldier on the right. The state motto, below the shield, reads “Liberty and Independence”. Better explanation of these symbols can be gathered from the Seal of Delaware. The current flag was adopted on July 24, 1913. Regiments from Delaware during the American Civil War flew a similar flag with the state coat of arms on a field of blue. 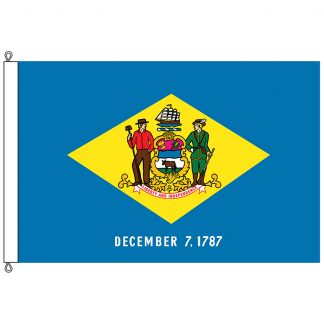