The flag of Connecticut consists of a white shield with three grapevines (each bearing three bunches of purple grapes) on a field of azure blue. The banner below the shield reads “Qui Transtulit Sustinet,” (“He who transplanted sustains us”) the state’s motto. The Connecticut General Assembly approved the flag in 1897. The design comes from the seal of Saybrook Colony when it was established in 1639. That seal depicted 15 grapevines and a hand in the upper left corner with a scroll reading “Sustinet qui transtulit”. When Connecticut Colony bought Saybrook in 1644, the seal transferred to them. On October 25, 1711, the governor and legislature changed the seal. They reduced the number of grapevines from 15 to three, probably to represent the three original colonies of New Haven, Saybrook, and Connecticut (Hartford) and rearranged the wording and position of the motto. 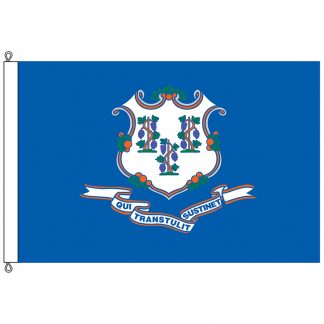