The Arkansas state flag, designed by Miss Willie K. Hocker of Wabbaseka, Arkansas, was adopted in 1913. The three (3) stars so placed are designed to represent the three (3) nations, France, Spain, and the United States, which have successively exercised dominion over Arkansas. These stars also indicate that Arkansas was the third state carved out of the Louisiana Purchase. Of these three (3) stars, the twin stars parallel with each other signify that Arkansas and Michigan are twin states, having been admitted to the Union together on June 15, 1836. The twenty-five (25) white stars on the band of blue show that Arkansas was the twenty-fifth state admitted to the Union. The blue star above the word “ARKANSAS” is to commemorate the Confederate States of America. The diamond signifies that this state is the only diamond-bearing state in the Union. 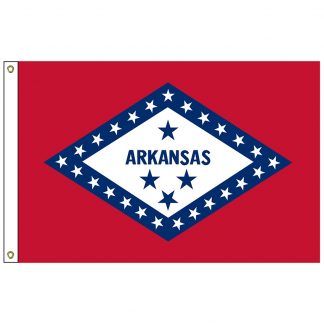