The Alaska state flag was designed by John Bell (Benny) Benson, a thirteen year-old in an orphanage in response to a contest sponsored by the Alaska Department of the American Legion. The prize was awarded in 1927. The flag was adopted by the Territorial Legislature in May, 1927 as Alaska’s official flag. The flag is dark blue, with eight five-pointed gold stars in the shape of “the Big Dipper” and a larger gold star representing the pole star, Polaris. When Alaska entered the Union in 1959, the territorial flag became the state flag. All the designs for the contest, as well as Benny’s prize–a gold watch engraved with the flag–are in the Alaska State Museum in Juneau. He did also win a $1000 trip to Washington, D.C.. to present the flag to President Coolidge, but never went because first his father was ill, and then President Coolidge was out of the country, so the $1000 was put to his education instead. Benny also picked the forget-me-not as the territorial (later state) flower. Indoor Flag with Pole Hem and Golden Fringe 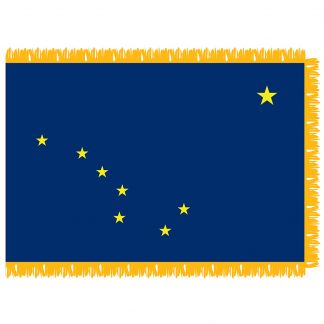