Create the ultimate in naval displays with this indoor parade set. This 8′ pole and 3′ x 5′ indoor Navy flag set comes with a gold fringed flag that features a blue replica of the Department of the Navy’s official seal. A broad scarlet scroll underneath proclaims “United States Navy” in dark blue letters. The handsome oak pole features a gold cord and tassels with an 8″ gold plastic spear ornament. It comes complete with a durable, plated gold plastic floor stand. The pole measures 8′ x 1 1/4″ diameter and the flag measures 3′ x 5′ in size.

The flag of the United States Navy consists of the Seal of the Department of the Navy in the center, above a yellow scroll inscribed “United States Navy” in dark blue letters, against a dark blue background. The flag was officially authorized by President Dwight D. Eisenhower on April 24, 1959 and was formally introduced to the public on April 30, 1959 at a ceremony at Naval Support Facility Carderock in Maryland. [1] It replaced the Infantry Battalion flag which had been used as the unofficial Flag of the United States Navy for many years. It is used on land in offices, in parades and for ceremonial occasions, and often on a staff at the quarterdeck of ships in port. [2] It is never flown by ships at sea, nor on outdoor flagpoles on naval land installations, and is not used as an identifying mark of U.S. Navy ships and facilities, as is the U.S. Coast Guard ensign.

Flag pictured is shown with Optional Flag Spreader that is used to spread out flag for full display on an indoor presentation set. 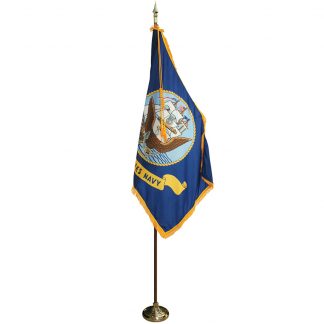