Give a salute to the United States Air Force with this indoor parade flag and pole set. This 3′ x 5′ gold-fringed nylon flag features the seal of the Air Force and 13 white stars for the original American colonies. Three additional stars represent the military branches of the Department of Defense. The 7′ oak pole has a gold cord and tassel with an 8″ gold plastic spear ornament. It comes with a durable, plated gold plastic floor stand. The pole measures 7′ x 1 1/4″ diameter and the set is made in the USA.

The flag of the United States Air Force consists of the coat of arms, 13 white stars and the Air Force Seal, on a blue background. The 13 stars represent the 13 original colonies, the three star grouping at the top portray the three Departments of the National Defense Establishment (Army, Navy, and Air Force). The crest includes the American bald eagle, the cloud formation depicts the creation of a new firmament, and the wreath, composed of six alternate folds of silver and blue, incorporate the colors of the basic shield design. The Indoor/Parade version is bordered by a gold fringe while the Outdoor version is plain. The flag was officially adopted by President Harry S. Truman on, March 26, 1951.

Flag pictured is shown with Optional Flag Spreader that is used to spread out flag for full display on an indoor presentation set. 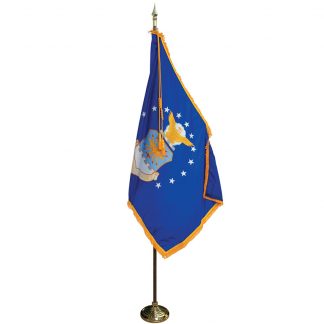