The Tohono O’odham are a group of Native American people who reside primarily in the Sonoran Desert of the southeastern Arizona and northwest Mexico. “Tohono O’odham” means “Desert People.” Although they were previously known as the Papago, they have largely rejected this name (meaning literally “tepary-bean eater”), which was applied to them by conquistadores, who had heard them called this by other Piman bands who are very competitive with the Tohono O’odham. The term Papago derives from Ba:bawĭkoʼa, meaning “eating tepary beans”, which was pronounced Papago by the Spanish. All of these flags are digitally printed knitted polyester. Made to order item. Lead time approximately 10 business days. 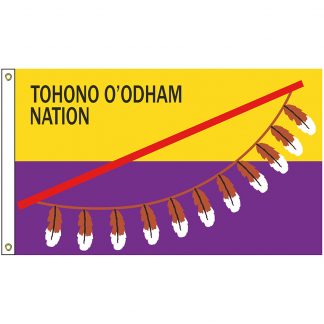