The Pend d’Oreilles, also known as the Kalispel, are a tribe of Native Americans who lived around Lake Pend Oreille, as well as the Pend Oreille River, and Priest Lake although some of them live spread throughout Montana and eastern Washington. The primary tribal range from roughly Plains, Montana, westward along the Clark Fork River, Lake Pend Oreille in Idaho, and the Pend Oreille River in Eastern Washington and into British Columbia was given the name Kaniksu by the Kalispel peoples. The Kalispel are one of the three tribes of the Confederated Salish and Kootenai Tribes of the Flathead Nation.
All of these flags are digitally printed knitted polyester. Made to order item. Lead time approximately 10 business days. 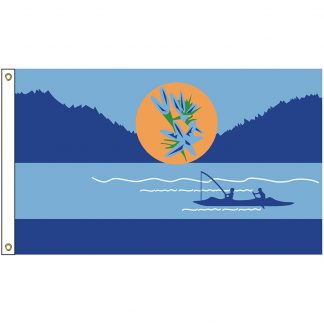