The Iroquois, also known as the Haudenosaunee or the “People of the Longhouse”, are an association of several tribes of indigenous people of North America. After the Iroquoian-speaking peoples of present-day central and upstate New York coalesced as distinct tribes, by the 16th century or earlier, they came together in an association known today as the Iroquois League, or the “League of Peace and Power”. The original Iroquois League was often known as the Five Nations, as it was composed of the Mohawk, Oneida, Onondaga, Cayuga and Seneca nations. All of these flags are digitally printed knitted polyester. Made to order item. Lead time approximately 10 business days. 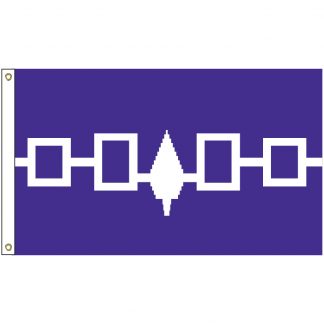