Flag Of Honor 3′ x 5′ Nylon with Heading and Grommets

The Flag of Honor includes the names of everyone who perished on 9/11; on all of the planes, at Shanksville, PA, the Pentagon and the World Trade Center.

The first responders are included on the Flag of Honor but without their rank or affiliation.

Fly this flag with honor and respect. 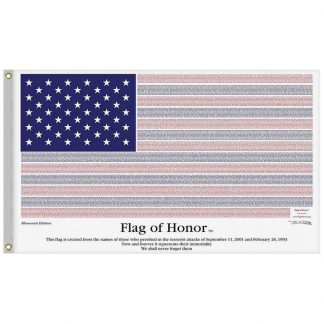