The Chickasaw are Native American people originally from the region that would become the Southeastern United States (Mississippi, Alabama, Tennessee). They are of the Muskogean language family and are federally recognized as the Chickasaw Nation. Sometime prior to the first European contact, the Chickasaw migrated from western regions and moved east of the Mississippi River, where they settled mostly in present-day northeast Mississippi. That is where they encountered European explorers and traders, having relationships with French, English and Spanish during the colonial years. The Chickasaw were considered by the United States (US) as one of the Five Civilized Tribes, as they adopted numerous practices of European Americans. All of these flags are digitally printed knitted polyester. Made to order item. Lead time approximately 10 business days. 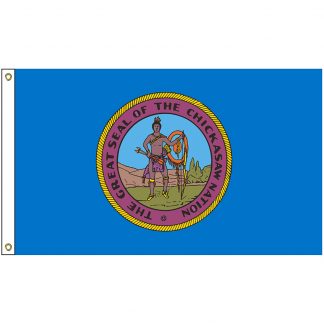 You're viewing: NAT-2×3-CHICKASAW 2′ x 3′ Chickasaw Tribe Flag With Heading And Grommets $79.90
Add to cart
Scroll Up