The Eastern Band of Cherokee Indians (EBCI) is a federally recognized Native American tribe in the United States of America, who are descended from Cherokee who remained in the Eastern United States while others moved, or were forced to relocate, to the west in the 19th century. The history of the Eastern Band closely follows that of the Qualla Boundary. The EBCI also own, hold, or maintain additional lands in the vicinity, and as far away as 100 miles from the Qualla Boundary. The Eastern Band of Cherokee Indians are primarily the descendants of those persons listed on the Baker Rolls of Cherokee Indians. All of these flags are digitally printed knitted polyester. Made to order item. Lead time approximately 10 business days. 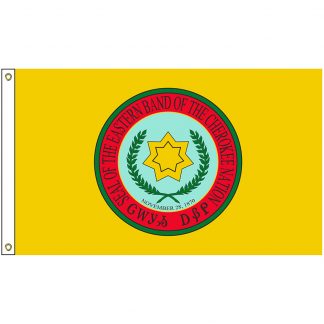