The Arapaho are a tribe of Native Americans historically living on the eastern plains of Colorado and Wyoming. They were close allies of the Cheyenne tribe and loosely aligned with the Sioux. Arapaho is an Algonquian language closely related to Gros Ventre, whose people are seen as an early offshoot of the Arapaho. Blackfoot and Cheyenne are the other Algonquian-speakers on the Plains, but their languages are quite different from Arapaho. By the 1850s, Arapaho bands had coalesced into two tribes: the Northern Arapaho and Southern Arapaho. All of these flags are digitally printed knitted polyester. Made to order item. Lead time approximately 10 business days. 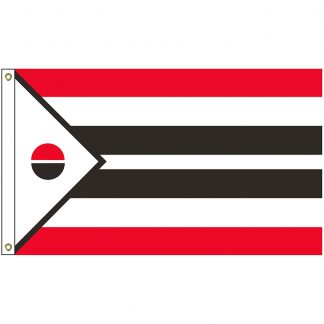 You're viewing: NAT-2×3-ARAPAHO 2′ x 3′ Arapaho of the Wind River Tribe Flag With Heading And Grommets $79.90
Add to cart
Scroll Up